Chat with us, powered by LiveChat
Skip Navigation
Post | May 2021 | For volunteers | 4 min read 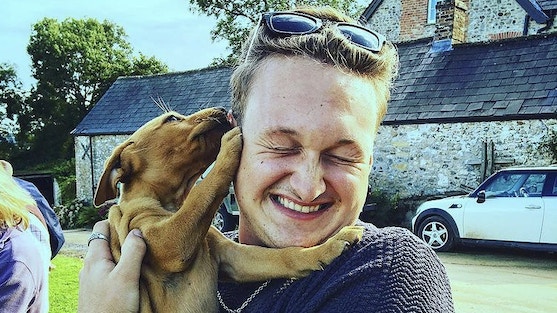 Alex regularly spends time in the volunteering in nature, and for him the experience has been life-changing. Read his inspirational story.

Alex, now 24 years of age, had suffered severely with his mental health since the age of 17 and had been hospitalised several times with multiple diagnoses, none of which seemed to be quite right.

Aged 22, he was living in London, working 9-5 in an office which made him miserable and so early in 2019 he decided to go travelling to Australia. During this time, his mental health took a turn for the worse and he ended up being sectioned. With no family or support network around him he ended up severely anxious and depressed.

He returned from Australia later that year, still struggling severely with his mental health, bed-ridden and with suicidal thoughts. Soon after his return, he was researching local organisations that might be able to help him and came across ARK at Egwood.

Acts of Random Kindness (ARK), is a land-based day facility in South Somerset comprising 12 acres of land, woodland, communal buildings and animals which offers a range of activities, experiences and support services to improve health and wellbeing.

He had a consultation with Simon, ARK’s Director of Operations, who took him under his wing.  ARK, who tailor their support to the individual and what they want to do, created a bespoke programme for Alex which included horticulture, woodwork and looking after animals.

“I started volunteering twice a week at ARK. I’d never come across an organisation like them before or seen such a deep level of care and commitment towards their goal. What I love about ARK is that they are small and much more approachable than a larger organisation which is good for someone who struggles with their mental health and anxiety.

“I started volunteering twice a week at ARK. I’d never come across an organisation like them before or seen such a deep level of care and commitment towards their goal."

“One of the key messages of the ARK is empowerment and so they tailor support around you so that you’re more empowered. It’s an amazing organisation.

“I expressed an interest in woodwork which I hadn’t done since studying GCSE Design & Technology. So, Simon asked me to make a bin. “Just do what you want”, he said, and it turned out really well. Simon always says that it’s not about the end product but how you get there. It doesn’t matter how it looks, it’s the process, being mindful of what you do and being in the moment.

“You’ve got to work it out for yourself and use your own intuition. Simon’s there to help if you need it but he gives you the autonomy and power to problem solve yourself which is really important because ultimately, you’re the person in charge of your own recovery, no-one else is.

“Simon is such a kind soul. He helped me to find a voluntary role working in mental health. I now work in mental health full time and I absolutely love it! He told he that I had something about me that would make me excel at my job and that I'd go really far, which made me cry.

Alex, who now works as a mental health worker in a complex mental health supported living facility, explains, “It’s an incredibly challenging job and very emotionally demanding. I was worried that I wouldn’t be able to handle it and that my own PTSD might crop up but ARK had rebuilt me from the ground up. They gave me my confidence back and the foundations I needed. Simon always believed in me.

“My mental health was like being in a storm but just because there’s a dark cloud it doesn’t mean that there isn’t blue sky above. If you’re patient and wait for the storm to pass, the blue sky will return.

“Simon really cares about his organisation and the people it supports. He said “there is light at the end of the tunnel, and you will be fine”. I didn’t believe it at the time but I’m through that now and I am absolutely fine! So, if you are thinking about reaching out to an organisation like ARK please, just do it!

"If you are thinking about reaching out to an organisation like ARK please, just do it!"

Simon, ARK’s Director of Operations added; "At ARK we aim to provide an environment where each individual has the opportunity to find space both physically and mentally, without pressure or expectation.

Given the chance to take stock, reset and build back confidence, positive changes can be made in how we see ourselves and in our approach to overcoming problems we may face.

Alex is a great example of someone who, when given the opportunity, embraced it and rediscovered the strength of character, determination and personal skills that could be seen by those around him but he had lost sight of along the way."

If Alex's story has inspired you to get involved in volunteering, click on the link below.

I want to volunteer

| For volunteers
Spark Somerset have produced a special video to say a big 'thank you' to volunteers across Somerset.

Getting the most out of volunteering

| For volunteers
You’re donating your valuable time, you want to get the most out of it, so it’s important that you enjoy and ...
See more

| For volunteers
Why volunteer from home?
The benefits of volunteering from home are immense, especially at this challenging ...
See more
We use cookies to ensure you get the best experience on our website.Read our Privacy Policy