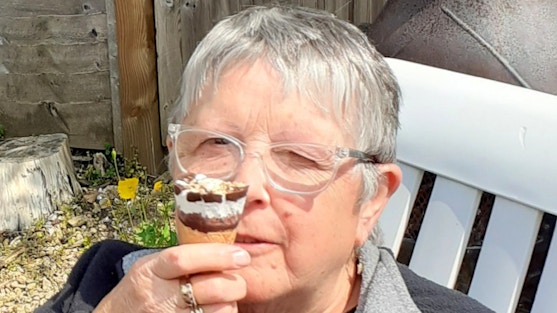 “My life experiences, including a career working in the NHS, have given me an insight and knowledge that I want to use to help other people.”

Having been a full time carer herself, Alison now volunteers for her local Carers Support Group. Read her inspirational story.

Alison has faced personal challenges throughout her life; a violent marriage ended when she summoned up the courage to flee to the safety of a Women’s Refuge. This inspired her to go on to help set up the Yeovil Rape Crisis line. She eventually remarried but her new husband died of cancer when she was only 47.

Bereft, she started writing poetry which was published, and which led to her meeting and marrying her husband, Nigel, who’d been given her poems to help him with the loss of his wife.

She and Nigel volunteered for Macmillan Cancer Support for many years until Nigel was diagnosed with Corticobasal Degeneration (CBD) a rare, progressive neurological condition that causes problems with mobility, speech, memory and swallowing.

When Nigel became incapable of looking after himself, Alison became his full-time carer which, as he increasingly slept less at night, left her feeling physically, emotionally and mentally exhausted. Sadly, Nigel passed away in June 2019.

During this time, Alison found support from Ilminster Carers, a group of people with similar caring experiences who understood what she was going through. When funding for the group ceased, Alison agreed to run the group as a volunteer.

“Carers groups are useful as we have the contacts and knowledge other carers need to know about. Practically, we can help with completing things like Attendance Allowance and Power of Attorney forms, which can be challenging at the best of times”.

“Full-time carers don’t have the time to think of their own needs and simple things, like attending a doctor's appointment or going out for a walk, can be hard to organise. Unfortunately, Covid made this worse with carers becoming even more isolated as respite breaks stopped, even those provided by family.

“Sadly, I am now giving bereavement support too, as some of the carers have been bereaved during lockdown and are feeling very lost.”

One of the carers describes how important Alison is to her. “I have come to rely on Alison's wisdom and sound advice and I would be totally rudderless without her. Not only is she a mine of knowledge when it comes to practical procedures but when one needs to know who to approach for help you can ask her and she never lets you down. She’s also a wonderful, sympathetic shoulder to cry on when there just don't seem to be any answers!!” Another, now bereaved, carer says, “The most important thing that Alison provided, which helped me to keep going, was that when I spoke to her, I was always the priority rather than just the carer”.

Alison volunteers because it helps her to still feel useful. “My life experiences, including a career working in the NHS, have given me an insight and knowledge that I want to use to help other people.”

If Alison's story has inspired you to get involved in volunteering, click on the link below.

I want to volunteer

| For volunteers
Since retiring, Alison Templeton, who worked in a variety of roles within local authorities, has returned to ...
See more

| For volunteers
Gabi was referred to the Open Mental Health Buddy scheme by her local job club. Due to long-term physical and ...
See more